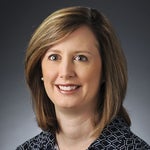 Mary Carol grew up in Jackson, Mississippi, spending much of her summers and weekends visiting grandparents in the small town of Columbia, Mississippi. During those visits she was exposed to a way of life that was vanishing: of large summer vegetable gardens, screened porches and swimming holes. A bookworm from her earliest years, it was literature that helped explain the world that was rapidly changing around her. After reading To Kill a Mockingbird in middle school, she made an early decision to become a lawyer.

Mary Carol graduated from Mississippi College in Clinton, Mississippi in 1992. She attended Vanderbilt Law School, where she was on the law review, then its editorial board, graduating in the top 10% of her class.

Soon after law school, a twist of fate led her to Mobile, Alabama. She came here to serve as a law clerk for a federal judge. The detour was well worth it. While in Mobile, she met her future husband, Banks.

Before joining The Ladd Firm, Mary Carol spent ten years working on litigation and appeals for larger law firms in Birmingham and Mobile. Today she practices estate planning and elder law, drafting will-based and trust-based plans for families. She often counsels families with an elderly family member in need of long term care, either immediately or in the foreseeable future. Her elderly clients often remind her of her grandparents and their friends who made summer visits to Columbia so enjoyable.

Banks and Mary Carol have two teenage daughters. Several years ago, one of them announced that she had been assigned to read To Kill a Mockingbird. Mary Carol and her daughters were surprised and delighted when Banks produced a first-edition copy that his mother had purchased when the novel was released. Working for big law firms was exciting at times, but it did not fulfill her original reason for becoming a lawyer. Estate planning and elder law offer that opportunity daily.

Fill out the form below and a Ladd Firm representative will contact you as soon as possible. Please specify how you would prefer for us to get back with you in the How Can We Help? box.

Thank you for contacting us. We will get back to you shortly.

Please complete all required fields below.